Other co-ops have pushed for more local control, while remaining members of Tri-State

​Chart: Tri-State has increased the price of electricity it sells to member co-ops, while the price for non-members has declined

Appendix 1: Tri-State average revenue from sales to members and non-members

The solar project will also save the co-op and its members money, by delivering power at a price below 4.5 cents per kilowatt-hour (kWh) - the lowest price to date for a distributed solar power project in the United States, according to Rocky Mountain Institute.

Otero County Electric described what that means for its members:

This project is both an environmental and an economic win for OCEC’s Membership. Since the clean energy produced by this project becomes part of our wholesale energy costs, the average annual savings of over $250,000 will automatically be passed directly to OCEC members.

But Otero County Electric could face challenges in pursuing another solar array, because the Carrizozo project will bring the co-op close to the 5% limit on local energy projects imposed by its power supplier, Tri-State Generation and Transmission Association.

There are 19 electric cooperatives that provide electricity to most of New Mexico, and 11 of those co-ops buy electricity from Tri-State. Those 11 co-ops are currently limited to providing just 5% of their electricity needs from local renewable energy projects, and must purchase the rest from Tri-State. Tri-State’s 2017 10-K filing with the Securities and Exchange Commission describes how its wholesale electric service contracts with member co-ops "obligates the Member to purchase and receive from us at least 95 percent of the power they require for the operation of their systems.” Out of New Mexico’s 33 counties, 27 counties are served entirely or in part by co-ops that buy electricity from Tri-State, and so are impacted by this restriction on local renewable energy development.

This report follows a similar approach as Uncooperative: Tri-State policies are limiting Colorado communities from developing local renewable energy projects, published in January 2018. That earlier report included the responses to a survey of 18 electric cooperatives in Colorado that buy electricity from Tri-State, while this report provides the responses to a similar survey of the 11 electric cooperatives in New Mexico that buy electricity from Tri-State. In addition to survey responses, a review of co-op websites, local media reports, the National Rural Electric Cooperative Association website, and other sources provided additional information. Combined, this provides a more complete look at how Tri-State policies are limiting co-ops from pursuing local renewable energy projects. 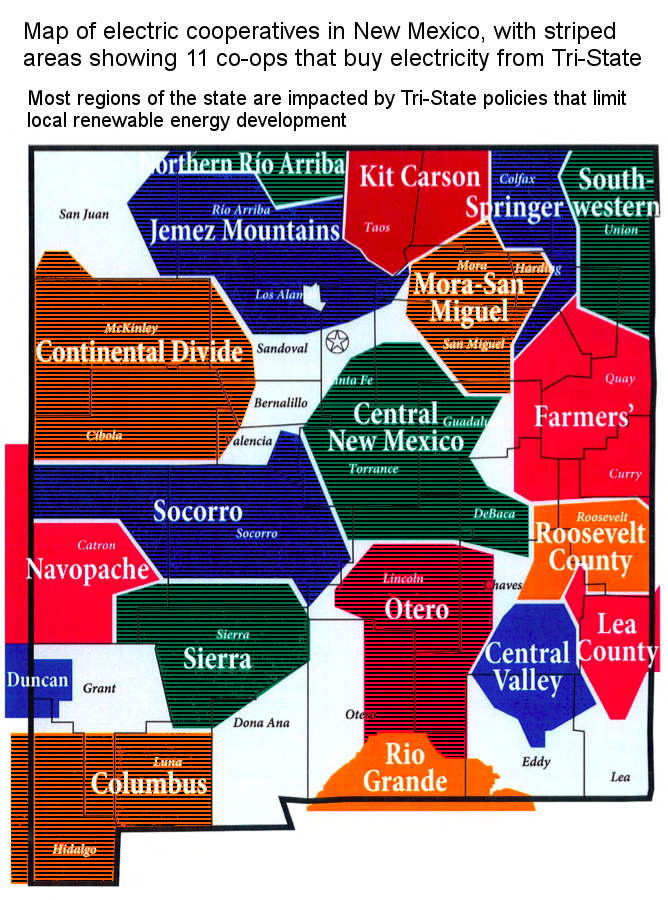 New Mexico also has even better solar energy resources than Colorado, and shifting economics are opening up opportunities for new participants. Over the last two years, the levelized cost of energy (LCOE) for community-scale solar systems has declined 40% and grown faster than any other type of solar project, according to a Rocky Mountain Institute report. RMI defines “community-scale solar” as projects between 0.5 and 10 megawatts, which are connected to the distribution grid.

So while major utilities have been able to build large scale solar arrays at affordable prices for several years, declining prices for smaller projects are now attracting interest from a much broader variety of entities. New Mexico Senator Martin Heinrich launched a solar toolkit last month as a resource for communities, companies, and others interested in solar, which highlights how “Cities are saving taxpayer dollars, tribes are providing stipends to their members, and businesses in cities and rural communities alike are seeing lower utility bills.”

Survey responses show that electric cooperatives are among those in New Mexico with a growing interest in solar power. Seven of the eleven co-ops in New Mexico that buy electricity from Tri-State are either pursuing solar projects, or have already built a solar array. Two co-ops reached the 5% limit, and one of those ended its contract with Tri-State in 2016. Three others co-ops are pursuing projects that will bring them close to the 5% limit. 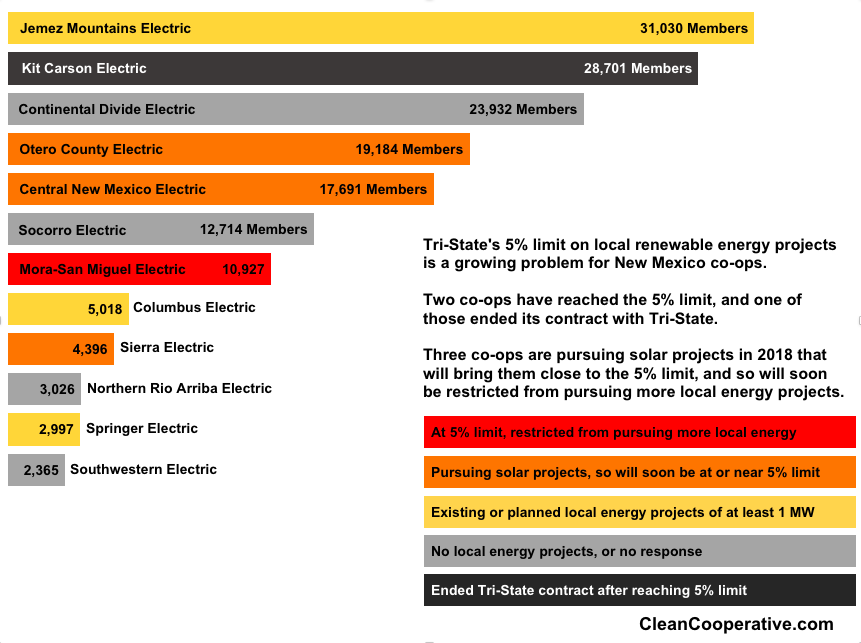 Mora-San Miguel Electric reached the 5% limit on local energy projects in 2014, with a 1.8 megawatt solar project in Las Vegas, New Mexico. The co-op has not pursued any other solar projects since the project came online.

Other electric cooperatives in New Mexico are also pursuing solar projects, and so will soon also be restricted from pursuing additional local energy development opportunities.

Central New Mexico Electric is pursuing a 2 megawatt solar project that could be online in Fall 2018, which will represent “about 5% of our total load,” according to the co-op’s general manager.

Sierra Electric is in the early stages of pursuing a solar project of about 1 megawatt, which will bring the co-op to an estimated 4% of its load.

Jemez Mountains Electric is exploring smaller solar power projects, in the range of 1 - 2 megawatts, after ending an earlier contract to build a 7.5 megawatt solar project. The co-op’s general manager told the Rio Grande Sun that Tri-State’s 5% limit was one of the reasons that the co-op had decided to stop pursuing the larger solar project, which would have maxed out its 5% limit.

Springer Electric shows on its website that a 1 megawatt solar array delivers power to its members. Representatives for Springer Electric did not provide details about the percentage of its electricity sales that the solar project provides.

Columbus Electric announced in January 2017 that it was pursuing a 1.85 megawatt solar array, but representatives for the co-op did not provide an update about the status of that project.

A representative for Continental Divide Electric said that the co-op had no projects to report at this time, and representatives for Socorro Electric, Southwestern Electric, and Northern Rio Arriba Electric did not respond to the survey.

In sum, at least seven of the 11 New Mexico co-ops that purchase electricity from Tri-State are pursuing local renewable energy projects of at least 1 megawatt, or have already completed projects. Those seven co-ops provide electricity to 91,243 co-op members.

One co-op in New Mexico has already reached Tri-State’s 5% limit, and three other co-ops are pursuing projects that will bring them close to the limit. Those four co-ops provide electricity to 52,198 co-op members.

Combining those results with the data from the survey of Colorado co-ops provides a glimpse at the broad impact on co-op members in rural Colorado and New Mexico of Tri-State policies that restrict local energy development. In Colorado and New Mexico, 13 co-ops are either approaching Tri-State’s 5% limit on local energy development, or have already reached the limit. Those 13 co-ops include most of the largest co-ops that buy electricity from Tri-State, and combined provide electricity to 302,805 co-op members - or just over half of the 603,613 co-op members served by all 43 co-ops that buy power from Tri-State. 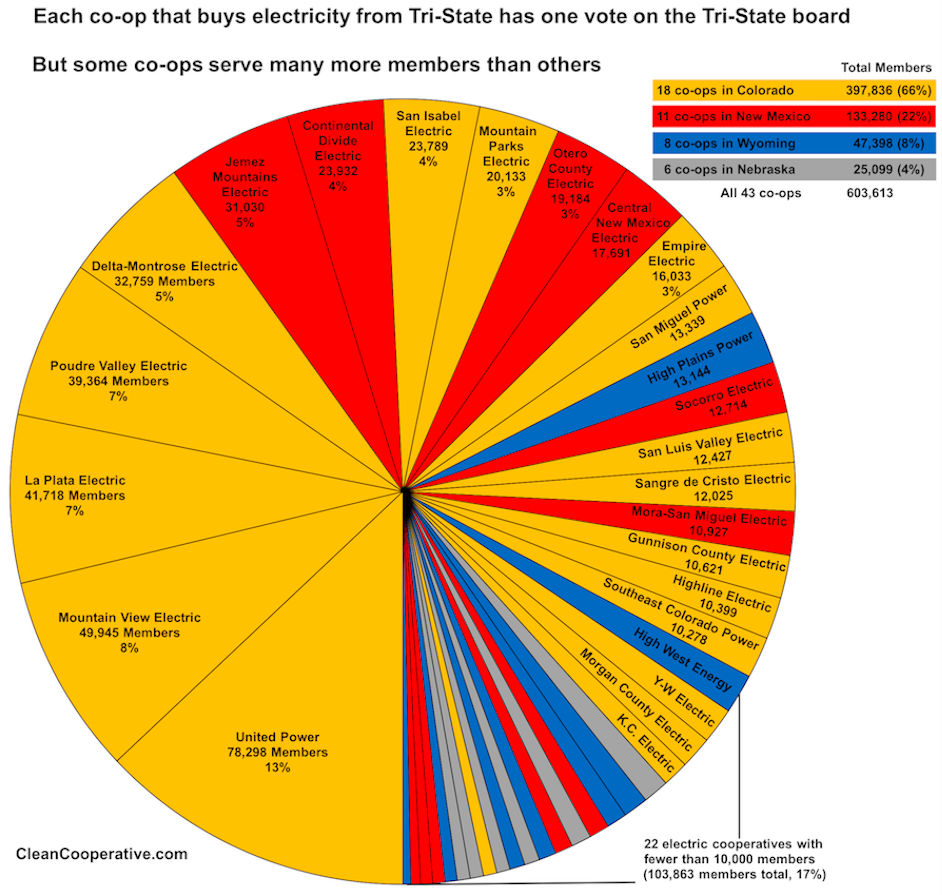 Kit Carson Electric has embarked on a different path, after ending its contract with Tri-State in 2016. The co-op’s CEO Luis Reyes told the Taos News there were two main reasons for the departure:

Kit Carson and Tri-State have been at odds for years over a number of controversial issues. Perhaps most notably, a provision in a power supply contract — one that does not expire until 2040 — limited the amount of renewable electricity the co-op could generate on its own to 5 percent. The co-op is up against that ceiling and has complained that the limit has stifled the development of solar power production in Northern New Mexico.

Tri-State has said the provision was necessary to ensure it sold an adequate amount of electricity.

The co-op has also complained that Tri-State had regularly imposed “arbitrary” rate increases and had been unwilling to subject itself to regulation. Tri-State again countered that it was beyond the jurisdiction of state regulators. The issue led to a lawsuit in federal court.

Without the 5% limit, Kit Carson is now building several solar projects, as part of a phased plan to build solar arrays throughout its service territory:

Kit Carson Electric Cooperative, Inc. (KCEC) and Guzman Renewable Energy Partners (GREP) have entered into an agreement to develop 35 megawatts of solar arrays over the next 6 years. Each array will be approximately 1-MW and will be connected to the KCEC distribution grid. GREP is KCEC’s wholesale energy provider and will own the arrays, and KCEC will execute Purchase Power Agreements for the energy they produce. By the end of the project every KCEC member will be powered by 100% solar energy on sunny days.

Other co-ops have pushed for more local control, while remaining members of Tri-State

Co-ops in Colorado that have reached the 5% limit have pursued a variety of other approaches, such as studying alternative options for power suppliers, building community batteries, and demonstrating that the Public Utility Regulatory Policies Act (PURPA) supports co-ops’ options to pursue local renewable energy project, despite the 5% limit.

Co-ops in New Mexico could also look to their own efforts to protect their members from Tri-State rate increases - by working together. Springer Electric, Continental Divide Electric, Jemez Mountains Electric, and Kit Carson Electric challenged rate increases that Tri-State had sought in 2013, which prompted the New Mexico Public Regulation Commission to intervene. Tri-State’s 2017 10-K notes that those proceedings remain suspended for settlement discussions, and “could result in oversight of our prior wholesale rates by the NMPRC [New Mexico Public Regulation Commission].”

Co-op members, directors, and staff in New Mexico should work with those in Colorado to address the growing problem of Tri-State policies that limit local renewable energy development, with an eye toward cooperative principles and values. As Otero County Electric noted, pursuing local renewable energy projects demonstrates Concern for Community, a key cooperative principle. Co-ops should also ensure that they maintain their Autonomy and Independence, and retain Democratic Member Control.

Removing the restrictions on co-ops from building more community scale solar projects will grow increasingly urgent, because declining prices for smaller solar projects mean that cost savings are not only available to electric cooperatives, but also directly to co-op members.

The city of Gallup, New Mexico will soon switch on a 10 megawatt solar array that will deliver power at a fixed price of 4.75 Cents/kWh. The city’s electric director told the Gallup Sun that “This project will save the city roughly $1 million over 25 years,” compared to the rates it currently pays to Continental Divide Electric.

Electric cooperatives should be well positioned to partner with municipalities, businesses, and other major customers to maximize the advantages of affordable distributed solar power throughout their service territories. But to do so, co-ops must be free to pursue the projects that make sense for their members and communities, without arbitrary limits. If Tri-State policies continue to limit co-ops’ local energy development opportunities, co-op members will seek other partners.

Appendix 1: Tri-State average revenue from sales to members and non-members

Additional data showing membership and electricity sales for all 43 co-ops that buy power from Tri-State is available in the appendices for the earlier report: